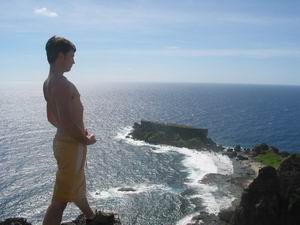 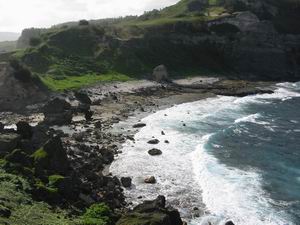 I can hardly believe that it took over 2 months for me to finally hike down to Forbidden Island after coming to Saipan (Island in the Northern Mariana Islands). It probably had something to do with all the warnings I had heard. Someone at the station was killed there a few years back and several other have also died when trying to cross to the island. Timing is essential because if the tide is high, there is a good chance you can be washed out to sea. There are also large sharks in the open waters on the east side of Saipan where there is no protection from the reef. Anyway, I had waited long enough for someone to go with me. I had no idea how to get down and across to this island but I guess that would be the adventure for the day.

I drove out to the overlook and then started my decent. I new there was a path somewhere but I couldn’t find it so I just bushwacked it down to the shore. Unfortunately when I got down I had no idea which direction to walk along the shore. Well actually there wasn’t a shore, only dangerous shelf rock. I used my best judgement and headed off in a direction across the shelf rock, making sure to run to the next safe point before a wave swept over the shelf rock.

I finally saw Forbidden Island in the distance. I had obviously not planned my desent very smart because I ended up quite a ways down the shore from the island. It was about this time that a mid-sized eel washed up on the shore just infront of me. After the initial shock of my first eel encounter, I quickly regained composure and changed focus. I needed some video footage of this guy! I whipped out my camera and just before I got everything set up, I hadn’t noticed a rather large wave coming towards the coast.

Before I had time to jump behind a rocky splash guard, I was drenched and my camera suffered substancial splashing. At the time the biggest disappointment was the fact that the eel was swept away. That feeling quickly past when I found my camera wouldn’t turn on anymore. I finally did make it to the island and had a good afternoon despite the fact that my camera probably needed repairs.