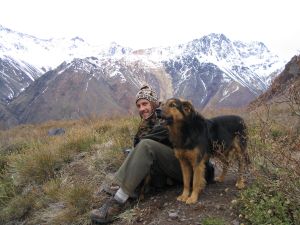 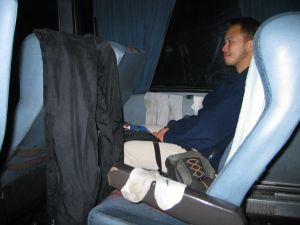 I can't believe it cause we weren't planning on coming here at all. But here we are in Chile!! Let me go back a few days first though.

We have been spending lots of time on buses. A couple days ago I discovered that the bus had a free coffee dispenser. Now, I have only had about 2 cups of coffee in my life and both of those I drank to be polite (but hated it). This stuff is different in South America – I can't get enough of SA coffee now and I am drinking it everywhere. So anyway, we are on this overnight bus and I discover this dispenser and start drinking cup after cup of coffee. Over the course of the bus ride I drank 15 cups (they were kind of puny, probably the equivalent of 1/2 a normal mug each). Anyway, I didn't end up sleeping that well for some reason – I guess I stumbled upon the side effects. It's all good though. Kevin and I have a little traveling rule – if something is free, stock up! The other thing that we do on the buses, which turns heads, is dry our clothes that we previously washed in a river or shower etc.. I think we have lost most of our shame now. I don't even notice when people get mad at me for draping wet underwear and socks over the back of their seat.

Last Tuesday we got to the west side of Argentina and entered the Andes mountain range. Wow! They are absolutely breathtaking! We got off in this remote little village and wanted to do some hiking. This was kind of a weird place – there was snow on the mountains but desert type area at the base. While hiking up to the snow we hacked open a cactus and ate the insides with a spoon (quite refreshing). We climbed to a notable height and foolishly watched the sun start to set. So now for the second time in the last weeks we were scrambling down a mountain side while there was still some light. This time we were time constrained and needed to catch a bus in a couple hours. We should have made it with lots of time to spare but Kevin and I got split up and both got lost. For a good hour we were crawling around farmer's fields by the light of our camera lcd screens, jumping over creeks and pushing through brush. I had the GPS so I eventually made it back 10 minutes before the bus was to leave. I thought for sure that I would beat Kevin but he was already waiting for me (with mud up to his knees and a big grin!)

After that we went higher up into the mountains. We arrived at the base of the largest mountain (supposedly) in the Western Hemisphere, Aconcagua. Unfortunately there was a foot of snow at the base. We decided to fork out the money for a hostel just this once. The next morning we made an attempt at the mountain but wimped out cause it was too cold and wet. That's about the time when we discovered that the town had a natural hot spring. This thing was amazing. A long time ago they built this building with multiple bathing rooms under this hot spring waterfall. Eventually over time the building became coated with various deposits and it now looks like it is part of the mountain. So you can go inside this building and slosh around in the various baths and tunnels filled with sulfur smelling water. It was fantastic and I made sure to wash my clothes in it.

I guess it was 2 days ago that we went down the other side of the Andes into Chile. We arrived in the capital (Santiago) and wanted to leave pretty fast – another wildly loud and crazy city. There were a few things that struck me while I was their though. First of all there are hundreds of Chinese food restaurants. They are very noticeable too because they all went shopping for their neon lights at the same outlet – every single shop (and there's at least on on every block) is covered in green and orange neon lights and they all have different, funny names that Kevin and I enjoyed decoding. The other thing about Santiago which wasn't the first experience but definitely the most occuring, was the amount of bus vendors and buskers. Seriously, at every stop someone jumps on the bus and starts selling stuff in a monotone, auction type voice. Sometimes people just jump on the bus and play instruments and then ask for money from everyone. It is always an adventure.

The best thing about Chile, by far, is the hitchhiking. Chile is notably the best on the continent and people (especially on the Panamerican highway) can't wait to get you in their car. We took advantage of that and hitchhiked 4 times all the way to this remote mountain village south of Santiago. We were going there mainly because we wanted more hot springs, but also because of the great hiking. The last leg of the road was dirt and only big mining trucks drove on it. We got picked up by this happy guy who entertained us the whole way with all the new Spanish vocabulary we didn't need to know. He was doing us a big favour so I didn't attempt to hang my wet underwear to dry on his review mirror. We got to this little village and naively realized that it was winter and all villages like these kind of close up. So we ended up getting stuck there all day with no food. We finally hitchhiked and got back to Santiago in the evening and started digging into the street food. Today we are making our way northward through Chile. This country has lots to offer. Beaches on the left, mountains on the right, ice to the south and desert to the north. We have been far to long in cold, snowy weather so we opted for the deserts.