Yep, this is France.

Euro bills out of the ATM. Convenient but expensive! 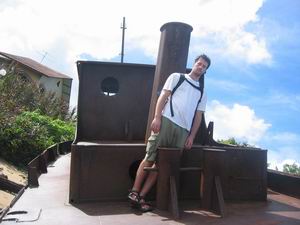 Something's wrong with this picture. hmm... 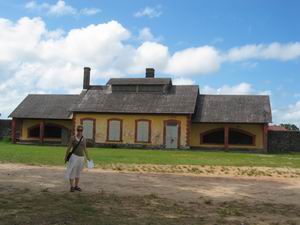 Amie in front of a prison kitchen. The compound held the famous Papillon and other crooks from France.

The eastern-most border city of Albina, Suriname is about the last place you would want to spend the day. Many locals are drunk, lounging around whistling at girls, or trying to forcefully sell you some transportation up-river. After a day in Albina, it was time to cross the Maroni river into France. I am serious when I say French Guiana is France. It is an official department of France, governed by the French government. People are French citizens, they vote in French Elections, use the Euro and send graduated kids to further education in Europe. It is so expensive in French Guiana because of the import costs. Many people have told us that prices are 40% more expensive than France itself. I would now agree with that after paroozing in some of the stores and checking transportation costs.

Not the most low budget place to spend the day but Amie and I brought our lunch from Suriname so it was all good. We didn’t realize until reaching the border that we actually needed a VISA to get into French Guiana. It is part of the Europian union but I guess there are so many problems with people crossing the border that they want some paperwork done first. We talked about this with the owner of our Albina guesthouse telling her that we didn’t have a VISA but she told us that it is ok if you are white and only stay the day. All you do is take a small boat across and without going through customs. So that’s what we did!

We left the hole of the Surinamese coast looking back over our shoulder at the hundreds of people shoving for buisiness prospects and headed across the river. Soon after reaching the French side, we started to notice many differences. We shouted them out one afte another to eachother in disbelief – no street dogs!, upkept buildings!, French signs everywhere!, no people hounding you for money! and no garbage everywhere! wow. I nearly even got sideswiped by a car driving on the opposite side of the road from that of Suriname.

Mostly what we did yesterday was walk around St. Laurent-du-Moroni and gasp at the prices of things. What would normally be 7SRD (roughly 3.50 CDN) was priced at 7 Euros (roughly 14 CDN). We’d heard from other travellers that French Guiana is a replica of the Metropolis right down to baguettes, espresso and French wine. The rumors proved to be true and we feasted on fresh brewed coffee and a baguette sandwich at a French bakery mid-day! The similarities with France were abundant (from what I remember from five years ago anyway)! French signage everywhere, drivers of Peugeots and Renaults keeping to the right side of the road, people speaking French in coffee shops and on sidewalks, and of course wine and baguettes.

French Guiana began as a penal colony when all other attempts at colonizing the country failed. So France’s worst prisoners were brought to the Guianas on a doubled sentence. They served their sentence in jail or working, and then during their doubled sentence took up residence in French Guyana and started colonizing it. So…French Guiana is officially made up of the riff-raff of France. French Guiana as a penal colony officially ended in the early 1940s after human rights organizations started commenting on the poor treatment of prisoners.

We checked out the former prison in St. Laurent – a gloomy place with huge high walls and communal living quarters. The compound at St. Laurent held the most prisoners, but it along with its counterpart Devil’s Island on the north coast of French Guiana and a leper colony further up the Maroni river, housed over 70,000 prisoners in its 100 years of operation. Even the infamous Papillon lived in the St. Laurent prison and eventually Devil’s Island and the movie was filmed on location in French Guyana years ago.