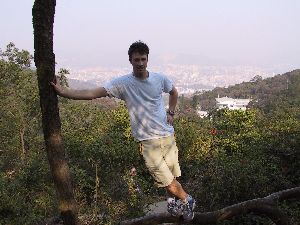 The last picture before we and the situation went downhill

Lindsay and I thought it would be a great day to climb Baiyun Shan (White Cloud Mountain) one day after work. So we took the bus to the north end of Guangzhou and set out. This was a typical china hike. Firstly there was a big wall surrounding the mountain so you have to walk through a toll booth. Secondly, there is a paved path or road up the mountain so you can get up in your high heels or tour bus. One of my first philosophies is that you can't keep me off a mountain. There has to be some back way around the wall! After about a half and hour of searching, we concluded that this particular mountain had a high wall all around it. So we reluctantly paid our 5 RMB (1$ Canadian) each and entered.

So we walked to the top and bla bla bla, looked at the city with a bunch of Chinese tourists. On the way down we noticed that there were so many little paths heading off the main paved stairway path so we decided to take on of them. I had been here before and I knew the dirt paths were much better than the normal paths. We ended up getting a little lost and it was starting to get dark so we decided to just bushwhack our way down to an entrance. When we finally did emerge from the jungle, things looked a little strange. We walked around a bit and saw a gate. But as we were walking out, a guy in a military uniform and a machine grabbed us and started yelling. Because of all the commotion, a few more came and crowded around us. We were led to a small room and told to wait. Over the next 5 hours, we were interviewed by about five or ten military officials (one who was flown in just to talk to us).

They were convinced that we were spies on their base!!! I have to admit this was probably the most scariest experience yet. We just kept shuddering and talking about jail and torture and things like that. Eventually we got in contact with our friend (who happened to be the son of a military official himself) and he explained who we were etc.. They still weren't very convinced and made us sign a bunch of documents, take photos etc… Then they drove us out of the compound in a jeep and dumped us on the street. Man, those Guangzhou streets never looked any better. Our buddy then told us that if it wasn't for him we would either a) be in jail, or b) be shipped out of the country. He advised us to put back on the high heels and take the stairs up the mountain.