Show me the Ocean 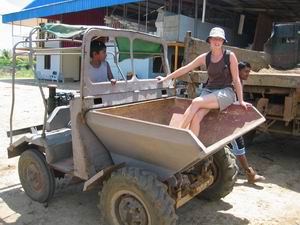 Amie on the Roughrider 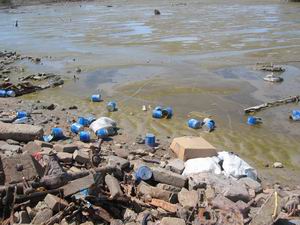 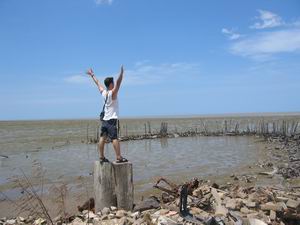 Steve beside the Suriname 'Beach'

Since I arrived in Suriname I have been interested in seeing the ocean. Unfortunately, no one talks about it and no one has ever said "let's got to the beach" or anything like that. Furthermore, the capital (Paramaribo) is not even built on the coast like a normal port city but a few kilometers inland. Last weekend was answer time because Amie and I went to go see the coast for ourselves. We took a bus route that we knew went to the north end of the city and then we started to walk. I checked on the GPS and it looked like only 3km or so. The paved road soon turned to dirt, then to grass and finally down to a footpath. It was around then that someone warned us not to go further because there was a high risk of snakes and maybe bandits. We were in our sandals and had no machetes or anything to defend ourselves (poor planning) so we decided to forget the ocean for the day. We started to head back when a weird vehicle that was used to transport concrete passed by. The man offered us a ride and informed us that his vehicle was commonly called a 'roughrider'. I'll tell you, sitting on the front was just that. The first picture below is Amie in the roughrider.

So that way was a complete failure as a passage to the ocean. So fast forward to this weekend and we got ready to make another attempt. This weekend we planned better. We got a map and looked for a road that actually went to the coast, we got our Dutch friends Egbert and Sieneke to come with us (who could actually ask for directions)