The island of Saipan has many attractions and the residents find many great activities like snorkeling, diving, hiking, caving and many others. A select crowd of residents are into another very important activity: treasure hunting. When I first got to Saipan, I couldn’t believe the way people talked about various trinkets and antiques that washed up on the shores. By the end of my stay I also started to dream about finding a light blue Saki bottle or a Japanese blown glass fishing float. There are two strains of treasure on the island. The first is a result of the intense World War II fighting on the island. The Americans and Japanese had a great standoff before the Japanese were finally backed up towards suicide cliff and beyond.

Many Japanese hid in caves and grottoes for months after the fighting. As a result the whole island is littered with a variety of goodies. There are old tools, clothing, grenades, batteries, weapons, armor, bombs, shrapnel, human bones and many other great finds. Treasure continues to wash up old artifacts through an ongoing process of ocean currents washing up treasure on the Saipan beaches. Some diehard booney stompers will even do Saturday morning beach visits to find the week’s latest. It was one of these routine Saturday morning visits that led us to a rocky oceanside hidden beach called Lobster Lagoon. Actually calling it a beach is a definite overstatement. Lobster Lagoon consists solely of a rock arrangement perfect for catching ocean garbage. Why anyone would want to go to such a place is a good question. Definitely a vacationing Saipan tourist would have no such desire or means.

Anyway, Dean, David and I trekked through the jungle and over the volcanic rock down to the narrow beach between the rock walls. No one had been there for a while so excitement resonated through the trench. We started reefing through buoys and ropes looking for anything that caught our attention. Of course the foremost treasure was any Japanese glass fishing float. There were also different classes of floats. Ones blown in a single motion (with no seams) were the best. Also, any markings which signified the artist were desired – and of course, bigger is better.

After several minutes of searching through the refuse, I held it up. It was a glass float of the ‘rolling pin’ variety. David Creel let out a yelp. No short termer was ever supposed to find something so rare and valuable. In all his 12 years on Saipan he had barely set his eyes on such a float. He maintained his composure and we continued to search well into the afternoon.

Another weekend, I was out with Dean Brubaker on yet another beach survey. This time when we pulled up to Tanke beach I was in mid conversation with the 60 year old Dean when his eyes lit up like a 12 year old. He took off running down the beach and I hadn’t even closed the door of the truck. He ran to the opposite end of the beach and I took off after him. Before I caught up to him he was holding above his head the largest glass ball I had ever seen. It was as big as a human head and later it was the centerpiece of his dinner table for as long as I remained on Saipan. It was also the talk of the town for several days.

Too big to take home! 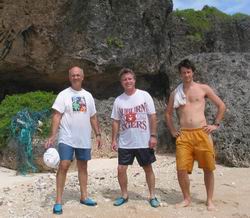 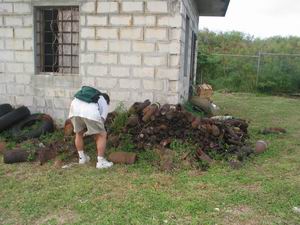 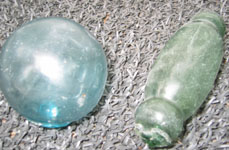 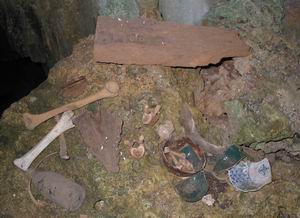